If you are asking yourself “what on earth is vBOB” all will be explained; but first, a little bit about reverse engineering.

Reverse engineering is the process of taking apart an existing product and figuring out what makes it tick. This process plays a large role in both innovation and repair. You can’t innovate if you don’t know what other people are doing. With repairs, sometimes you come across a product with no documentation or that is highly proprietary.

That leads me to vBOB. 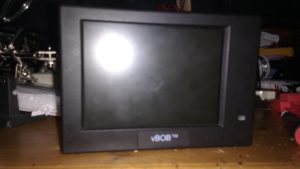 I picked up this device at RE-PC Seattle for a whole $2. After a quick Google search, I made several more Google searches, and found absolutely no information. The only option was to try and reverse engineer Bob to see what it was. Before even paying for Bob, I noticed that the only port on the device was a phone jack style connector (RJ12, according to later research).

I dug through bins for quite some time and eventually found a cable and was on my merry way, with very little information.

Usually in reverse engineering, you actually know what it is you’re looking at. This was not the case. It could be a GPS, could be a TV, could be a touch screen. There was a label on the back that yielded some useful information. “Warning: Do not watch while driving. 12V 1A.” I assumed then that power must come through the RJ12 port, and that the device was likely something akin to a tv, given that it had a speaker in the back. 6 pins could be Power in, Ground, audio in, audio ground, video in, and video ground.

The next step was to test this hypothesis, and if proven correct, figure out which pins connected to what. In order to do this, I had to open it up. 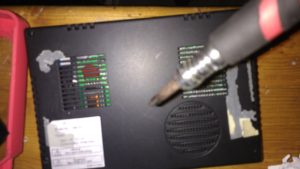 Inside I found that the I/O port was on a small PCB connected to a larger circuit board via a ribbon cable. I carefully unlocked the ribbon cable and unscrewed the smaller board and removed it so I could test it. 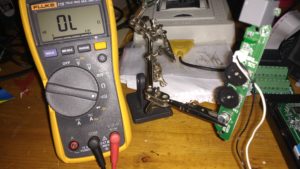 The board has two knobs: one for the screen contrast, and one for volume control. I noted an IC, which I presumed to be an audio amplifier, and this proved to be correct. I traced all the connections from the IO port to the IC and the ribbon cable and mapped it out as I went along. My initial assumption seemed to be right so far. I looked up the IC, A TDA7052A mono audio amplifier and verified that my drawings fell in line with the pinout. I tracing the audio input of the chip back to the RJ12 connector proved somewhat challenging, as I wanted to be absolutely certain that I was correct. When I wasn’t getting a resistance or continuity I assumed that there must be a decoupling capacitor. After several measurements, my suspicions were confirmed, and it turned out this capacitor was in series with two resistors. I traced all of the connections to the amplifier, and most of the connections to the ribbon cable (I assumed that the remaining connections were either NC or connected to the Contrast knob).

With that done, I turned my attention to the larger PCB 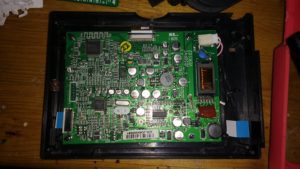 Fortunately there wasn’t much more information I needed, so I was able to narrow my efforts. Given that I had already verified the connections for ground, audio, and power, I only needed to figure out what type of video signal the screen could process. That meant I could ignore pretty much all the components on the larger circuit. There were only three ICs, all I needed to do was figure out which one controlled video, and what type of signal it could process. While I couldn’t find any information on the largest chip, the other two turned out to be a PWM generator, and an LCD controller. The Sharp RB5P0070M is a line of “Video Interface ICs for TFT-LCDs.” According to the manufacturer “It can be used with composite video, Y/C, and analog RGB signal input.” Given that there was only one remaining line in on the RJ12 connector, I deduced that it must be for composite video.

So what now? After figuring all of this out, it was time to construct an adapter. 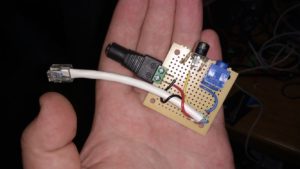 The end result is that I now have a small, working TV. 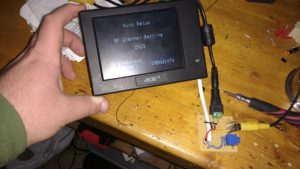 I also learned other valuable information: vBob contains a chip that can process multiple types of video. This means I may be able to add ports to the device. There is also the mystery of the third micro controller. It is labeled 8 digit A439K0191 8D02C. This microcontroller could contain additional features.